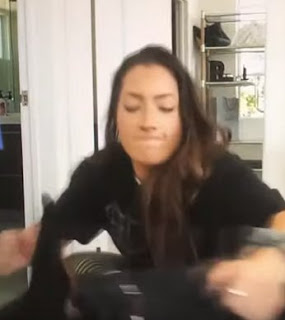 Most of you reading my blog probably have no idea who Brooke Houts is. In case you are unaware, she is an irrelevant YouTuber who gained notoriety for making super edited and cringe-worthy videos of her with her dog, a doberman pincher named "Sphinx".

I am not sure if it happened early this morning or last night into the early morning, but Houts basically exposed herself by uploading a video onto her YouTube account. She actually went and uploaded the wrong video, the unedited version. Shortly after she discovered this, she deleted it (or made it private) and uploaded the edited one.

With almost 330,000 subscribers, Brooke Houts subscribers noticed and the video went viral, as when one domino goes the rest follow. The video started circulating all over the world wide web as a result. I watched the video a few hours ago and was literally disgusted by this woman's outlandishly sinister behavior. In the video, you can see her yelling at the dog and sticking her finger in the poor dog's face. Shortly after, Houts is seen pushing the dog away, pinning it down, and even spitting on the dog.

She is disgustingly vile.

Based on the video, I believe this is not the first time she has abused her dog, as you could tell by how Sphinx reacted to her abuse, he had to deal with this before. This low life should not be able to own a dog. And shame on anyone who defends this piece of shit and her abuse. To be honest, I am hoping the ASPCA and PETA get involved and remove this innocent dog from Brooke Houts care. Not sure if YouTube will delete her channel, but they do a major disservice glorifying this animal abuser simply for a quick buck. As the second most visited site online, it is evident and crystal clear why her channel still exists.

Anyways, Houts attempted to save face and basically do damage control by uploading one of the most cringe-worthy apology videos ever. I don't believe her apology is sincere and if anything, I truly believe she's sorry she got caught more so than sorry for hitting her dog.

I believe Brooke Houts is dangerous and clearly unfit to be caring for this precious sentient being let alone any dog at all. Hopefully she is investigated by authorities and charged with animal cruelty for her crime.
Animal Abuse Animal Cruelty Animals Brook Houts Brooke Houts Crime Doberman Doberman Pincher Dog Dogs Sarah Afshar SarahAfshar YouTube

Anonymous said…
I am surprised she still has YouTube. She’s really disgusting.
September 2, 2019 at 5:17 AM